The Batman: An Intriguing Approach Undone By a Weak Screenplay (Blu-ray)

Singin' in the Rain: A Masterful Movie Musical (4K/Blu-ray)

The Winners of the 94th Annual Academy Awards

The Winners of the 33rd Annual Producers Guild of America Awards

It’s the event that comic book/MCU fans have been waiting for. Over the course of ten years and 18 films, Marvel Studios has slowly built up its cinematic universe, putting vast amounts of time, money, and effort into introducing and developing its plethora of characters, all of which has been leading up to the point where they would finally come together to do battle against the most dangerous foe any of them has ever come across. “Avengers: Infinity War” was never going to

First Reviews for Avengers: Infinity War Are In

At long last, Marvel's "Avengers: Infinity War" is set to open this Thursday evening, and with press screenings having taken place over the last couple of days, we finally have the first full reviews of the film pouring in. From the 63 reviews posted on Rotten Tomatoes, it currently sits at 90% with a score of 7.7/10, while the film currently has a 70 on Metacritic from 31 reviews. Here just a small sampling of what's being said so far: "Marvel has pulled off all sorts of cin

Today, Marvel Studios and Disney have announced the home release of what has been, by far, the biggest film of the year thus far, "Black Panther." The film has received an incredible amount of praise, garnering an impressive 97% (8.2/10) on Rotten Tomatoes and an 88 on Metacritic, and that's not to mention its $1.3 billion intake at the box office (so far). While the film doesn't quite live up to the hype that's been generated these past couple of months, there's no denying t 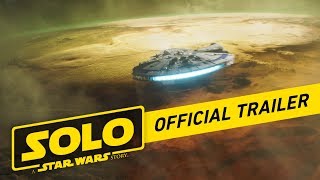 Solo: A Star Wars Story Gets an Action-Packed Second Trailer

With only a month and a half left before the film's release, Lucasfilm has released a second trailer for their next big "Star Wars" spinoff, "Solo: A Star Wars Story," giving us a much better look at the film than before. The film, which will chronicle the early days of the beloved smuggler, has had no shortage of difficulties during its tumultuous production: the original directors getting fired, most of the film having to be reshot, and an acting coach having to be called i